“Soup for Syria may be the most compelling cookbook ever created. Through her photographs and collected recipes, Barbara Massaad directly connects us with a people in dire need of our help. Just holding this book is nourishment for the soul.” —Jim Clancy, former CNN Correspondent and Anchor, awarded A.H. Boerma medal for coverage of food and hunger issues by F.A.O. (U.N. Food and Agriculture Organization)

"This new book from Barbara Massaad is vital to the culture of her country and utterly inspiring to me. She finds and explores forgotten traditional foods and techniques and then develops recipes that are irresistible and nourishing. They are not only for the Lebanese but for all of us." Alice Waters

Winner of the Gourmand World Cookbook Award and the International Academy of Gastronomy. “Documenting traditions, recipes and rituals ensures their survival, it is vital work. Barbara Massaad’s beautiful new book Mouneh goes to the heart of Lebanese life. She is a writer and photographer, but above all she is a custodian of a wonderfully rich culture.” Alice Waters 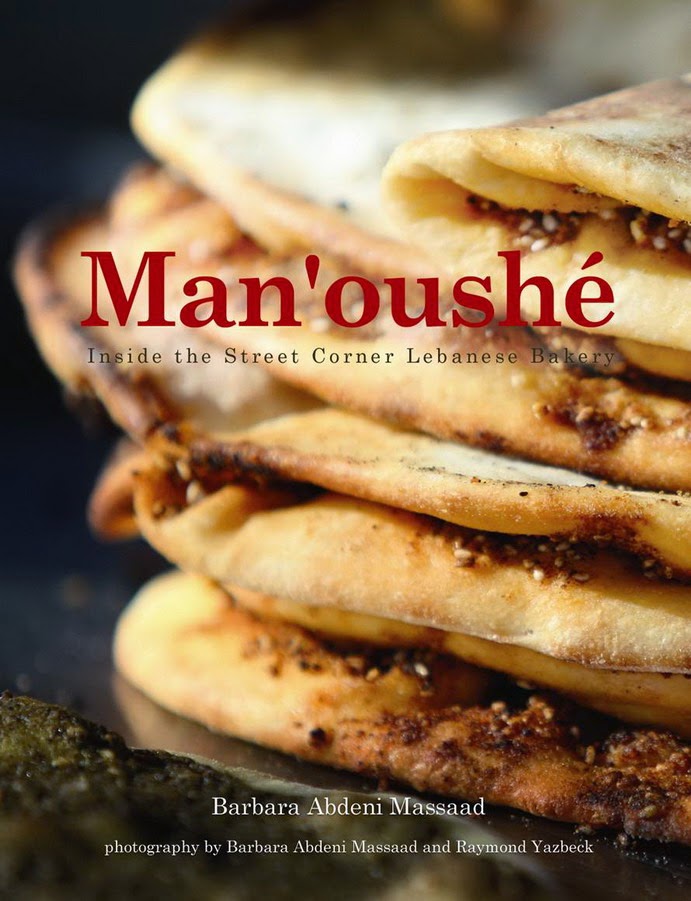 Winner of the Gourmand World Cookbook Award. “Despite the dislocation caused by its civil war and the continuing conflict with its neighbor to the south, Israel, Lebanon has managed to nurture its justly admired culinary traditions. Among these institutions are the city’s bakeries, each unique to its neighborhood and serving deliciously fragrant breads and pastries. Massaad’s book celebrates these bakeries and teaches how to replicate their products in a contemporary American kitchen. Specifically, man’oushé refers to breakfast bread, a disc of flat bread perfumed with sesame and wild thyme. Working from just several basic yeast doughs, Massaad shows how to form and bake a host of Lebanese breads and meat pies. A reasonably adept home baker will find Massaad’s recipes easy to follow, and thanks to the Internet, assembling ingredients is not a burdensome challenge. The book’s full-color photographs bring into focus not just the foods but also the lively characters who constitute a remarkably diverse nation. Especially useful for libraries with significant Middle Eastern immigrant populations.” —Booklist

Two roads diverged in a wood, and I-
I took the ones less traveled by,
And that has made all the difference.
Robert Frost

Welcome to my Blog!

I have been meaning to create this blog for a long time. Why? I have been roaming Lebanon for years now and I have come to the conclusion that it is such a shame that I don't document these journeys on the net. What is a culinary journey one may ask? I shall tell you... It's taking the car early morning (after dropping the kids at the bus stop) and going with one's car on an adventure dealing mostly with FOOD, wonderful people, and amazing places. Food glorious food ... not everyone knows what they put in their mouths... not everyone knows the people and places that have to do with the last bite they just had ... So my aim in life... other than being a good wife and mother ... is to write culinary books on the matter. My first book was published in Dec. 2005 entitled Man'oushe: Inside the Street Corner Lebanese Bakery. My second book (which started the day after the launching of Man'oushe) is finally out. I will let you in on a little secret, when one publishes a book, it is like giving birth and sometimes authors experience baby blues. Mouneh was published in Nov. 2010, it deals with traditional food preservation. Yes, I am ready to start my third book now - it will deal with the subject of cheese making. Who knows where this journey will take me? In a nutshell, this is who I am!

Who says we can't grow Zaatar?

"If you can read and have an oven and a work space, there is no reason why you can’t make a decent loaf of bread." —James Beard


This is what I have been preaching all along. I would even say you don't need to read. Everything lies in our little brain (stubborn). We have to battle our fears and just try. Success is eminent when you give it a chance and bake until you succeed.

Posted by Barbara Abdeni Massaad at 4:45 PM No comments:

Email ThisBlogThis!Share to TwitterShare to FacebookShare to Pinterest
Labels: James Beard on Bread

Cooking by the Numbers ... Man'oushe

Looking into the bestselling cookbooks of 2012

One name comes up over and over again in discussions of the future of cookbooks: Ottolenghi. Israeli chef Yotam Ottolenghi’s Jerusalem (Ten Speed, 2012) is drawing attention to Middle Eastern cooking both here and in the U.K. (where Ottolenghi has four restaurants).

Kate Heddings, deputy food editor of Food & Wine and executive editor of the magazine’s cookbooks, such as America’s Greatest New Cooks (Feb.), says Middle Eastern seems to be the hot new cuisine. She foresees growing popularity for Jewish and Persian food and points to the success of Clarkson Potter’s The Mile End Cookbook (2012) and anticipation for Russ & Daughters: Reflections and Recipes from the House That Herring Built (Schocken, Mar.) by Mark Russ Federman, former owner of the eponymous appetizer store on New York’s Lower East Side. In May, Interlink hopes to capitalize on the burgeoning Middle Eastern trend with Barbara Abdeni Massaad’s Man’oushé: Inside the Street Corner Lebanese Bakery, about the pizza-like national pie of Lebanon.
Posted by Barbara Abdeni Massaad at 7:43 AM No comments:

Email ThisBlogThis!Share to TwitterShare to FacebookShare to Pinterest
Labels: Cooking by the Numbers

Messages from Lebanon: The Food Manifesto

This woman is wonderful. She is preaching the Slow Food philosophy without even knowing about Slow Food. It's common sense. Eat local foods, women cook for your family, preserve traditional recipes.
God bless you ya hajjeh!

Posted by Barbara Abdeni Massaad at 6:41 PM No comments: